Today, more than any other so far, did more to open my eyes to what everyday Israeli people feel and think.  This evening, we were honored to hear a special advisor to the government and the last 4 prime ministers.  He spoke about the complex relationships here in the Middle East and how, much to the disagreement of many of your closest friends at home, CNN, and our government in particular, the Israeli people do, in fact, seek peace.

He explained that we as Westerners must put on the shoes of all people in this region and try to understand them from their own perspectives.  And, for that matter, peace is not the kind of peace we value and seek here in the States, where we achieve a lasting peace based on mutual respect.  No, they hope for just one more day without conflict, without one more attempt by terrorists to take out their children at school or, as just happened a block from here recently, a man who wanted to kill Jews ran into two people at a bus stop.

I heard from a handful of different people that peace is desired, and that they don't want to fight, but are forced to defend themselves.  But peace is possible.  Look no further than Egypt, Jordan and Saudi Arabia.  All have active peace treaties with Israel.  And peace is desired with the Palestinian people, many of whom are tragic victims in the pawn game played here.  When leaders force a resident to store weapons in their home, and if refused, shoot them out in the middle of the street.  And we were given proof.

We had a very rare privilege to see selected parts of an Israeli Air Force base and speak with a squadron F-16 navigator, an articulate young man who was candid with his personal thoughts of life and his mission, while being careful, of course, not to reveal any classified info!  He, too, expressed his desire for peace and the Israeli protocol not to harm innocent people whenever possible, and how that saddens him when cowardice uses human shields - children sent to either find mines or block attacks.  And the enemy knows they won't shoot.  He told us the lengths they go to in ensuring as far as possible to not harm civilians, giving ample warning and using sophisticated technology to find out who is in a building.  We saw actual footage of missions done recently (back in August) to back up his words.

And yet when innocents are hurt, he grieves.  I do, too.  I met a young girl (OK, 20 year old young woman!) who is now an Air Force Lieutenant and her proud parents who toured the base with her today.  And I saw the fear in them as they said goodbye, knowing at any moment, her life may be demanded of them.  (For those who may not know, every citizen must serve 2 years in the military.  I saw a young woman in a wheelchair, who only had use of one hand and part of an arm, in uniform, carrying material to the reception area!  Everyone takes part.  Would that happen here?)

I spoke with several people on our tour today of Megiddo (more in a moment) as well, and how glad they were that the US, despite recent events in support of Iran, still cares enough to come and see for themselves.  I have been thinking about these interactions tonight, and I have a LOT to process, especially from our guest speaker this evening - the many implications raised and cultural awareness that he brought to the table.  Expect more on this in the days to come, I think!

Our historic site we visited: Armageddon in Revelation 16 where the final battle will be fought in the End Days.  Here, overlooking the Jezreel Valley, the most famous battlefield in the world, stands the ancient royal Caananite citadel, the king of which was slain by Joshua in Jos. 12:21.  Here, Solomon rebuilt a fortified defense post in his kingdom, 1 Kings 10:26, with stables capable of taking care of 450 horses and 150 chariots - the tank battalions of that day!

We toured the ruins - built 25 times, one on top of the other, as was common in that day - to build on the old foundations after conquests or earthquakes destroyed a town or fortress.  Archaeologists have uncovered down to the 17th layer, Solomon's era, because it is the most significant in history.  Here you can pick up fragments of 3000 year old pottery and touch the past in his day.  And the overlook of this important region stimulated my thirst to know more of God's Word and the history we have as heirs - grafted into this Vine!

What provokes your interest?  Is it foreign relations?  Global crises?  Or might it be historical facts that reveal the future.  Can you see how all of these topics are intertwined together?  I am beginning to, myself... I hope you do, as well.

And, since it's 11PM and we made the long trek to Jerusalem, good night from the Holy City.  I am grateful you are on this journey with me.  Tomorrow the Dead Sea and Masada await us! 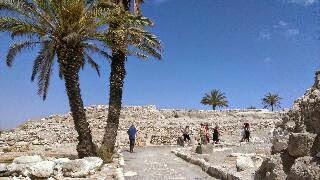