Today we started early and began the 2nd of our 3 days in the Old City by entering the Moslem Quarter at the Lion's Gate. (We know it as the Sheep Gate in the Bible due to the livestock sold there up until the early 1970's. We walked alongside an old Muslim cemetery en route to the Via Dolorosa, the path traditionally said to be the one Jesus took to Calvary.

First stop: St. Anne's Church, built by the French and was remarkably left standing after the Suleiman invasion due to it's phenomenal acoustics that they used to train the men who issue the Islamic call to prayer.

Here archaeologists discovered underneath several layers of building, the actual pools of Bethesda (meaning "house of mercy") in Hebrew that Jesus healed the lame man in John 5.  We then entered the church and tested the acoustics in worship...what a thrill!

As we reentered the narrow street, this quarter was filled with scents and spices, Turkish coffee and fresh meat, and sweets that would send anyone into diabetic shock! Lots of bargains to be had but none I took advantage of!

We then entered the Church of the Condemnation and Flagellation, the very site where scholars and scientists believe Jesus was mocked, flogged, and dressed up as a king, spat upon and stood trial before Pilate before finally being led off with the cross-member across his shoulders up the road to Golgotha.

This placed moved me dearly, as I sat upon the exact stone courtyard (now underground due to the City being built on top) that Jesus endured the harsh hand of the Roman garrison.  If you've seen that horrible part in The Passion of the Christ, you know what I mean. Etched in those stones were the game squares used by those soldiers to cast lots, the game of chance played for our Lord's garments. A wow moment, to be sure!

You may also know this place as the Antonia Fortress, a place Paul knew, as well. Preserved here in this church are the remnants of the Hadrianic Arch that spanned across the street and sidewalk as you entered Jerusalem.  This was my favorite stop today.

Because today is Pentecost Sunday - the day we commemorate the giving of the Holy Spirit - our guide took us around most of the Via due to the large numbers of Christian pilgrims trying to complete the 14 Stations of the Cross. (I'm glad we did, as the City was packed today!)

We wound our way through tight corridors and came to the Church of the Holy Sepulchre, a joint effort by Roman Catholics, Armenians, Copts, and Greek Orthodox mark the place Jesus was traditionally crucified, wrapped for burial and then entombed. It was an ornate experience of all the different brands of the faith coming together to honor  Christ in their own way with their own interpretation of the last 4 stations.

What struck me were the number of nationalities present: Indonesian, Indian, German, Greek, Russian, Canadian and Filipinos...all together to be where Jesus was.  These are the facets found in the diamond of Christ's Church. The question is, do we recognize those different from us as such? Faces and shapes and new flashes of holy light in a dark world that Jesus can use for His glory!

We finished today with lunch at another kibbutz hotel and restaurant, this one nearer our hotel that suffered intentional damage during the war. From here you had a panoramic view of Bethlehem, now not toured by groups due to the high level of danger for foreigners, especially those like me!

I saw God's hand today, as we prayed for Donna, who has become a good friend this trip, and her heart issue. As we knelt on those cobblestones where Jesus' stripes would heal us, she received the healing she needed to keep going, as her a-fib subsided. Isn't it great when God answers prayer so directly?!!

Today's post is probably too short for you, but my heart and head are full. What about these words hits close to home? Is there a take-away for you to apply in your life?

Lord, bless those that read this and their walk with You...THE Way, the Truth and the Life...amen! 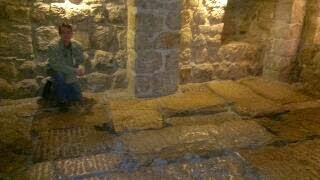 Posted by Mike Spradlin at 4:54 AM